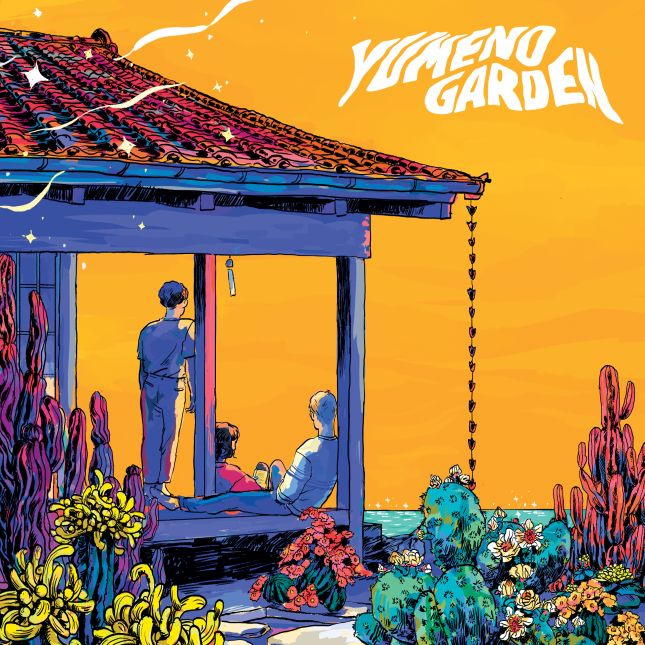 Article originally appeared on The Music

Last Dinosaurs have always had the sort of sound that feels like bubbles floating through a picturesque car commercial, clean, soapy, and hard to connect to without bursting the veneer. For their third studio album, Yumeno Garden, the Brisbane boys have done little to alter their output.

Erring on the pop side of rock, the album is full of velcro hooks and circular choruses that do an admirable job of lodging in your brain, but barring one or two slow dives everything proceeds at a predictable, albeit enjoyable, tempo. The overall effect is one of mild homogeneity, with individual songs not selling themselves so much as painting a sonic spectrum. This staid approach to songwriting leaves a catalogue of tracks that could be easily shuffled between albums with little to no consequence.

The production itself shows an interesting trend towards the sort of under-blown yet encompassing back end prevalent on most vaporwave masters. While intriguing and expansively lush, any subtleties are quickly engulfed like cookie crumbs falling on a deep plush carpet.

Yumeno Garden is bound to be well received and will certainly make a fine addition to any cafe soundtrack, but for a band edging up on its first decade it shows surprisingly little growth.

Mark Lanegan and Duke Garwood have circled each other for over a decade, with Garwood’s guitar strung across both Gargoyle and Blues Funeral, yet, this is only their second double billed album.

Following on from the five-year-old, Black Pudding, the pair have created something a little lighter on the palate, let’s say white souffle by way of the bayou, but that doesn’t betray its density.

For fans of their equally extended careers, there’ll be some retread, though it’s less like local streets and more akin to visiting cemetery kin. The new ground covered is fresh and dirty as turned earth.

Inherently touching and darkly familiar, With Animals dulcet batch of misery is a slow-motion gut punch — the sort of thing that might slip out of a whiskey bottle onto a dusty old porch, staining a permanent lineament. There is so much gravel washed sadness you’d be forgiven for missing the slight social commentaries embedded in Lanegan’s lyrics. The title track’s knife-like chorus, “Girl, you are a murderer,” serves as an ode to meat consumption and also a wonderfully anti-romantic diatribe — combined with Garwood’s cutting compositions, their songs have a tendency to stick in your soul.

The Gametes: The Astronomical Calamities Of Comet Jones

Exploding onto the scene in 2017 with all the velocity and cult acclaim of a popped pimple, The Gametes have been enjoying something in the field of meteoric success.

If you imagine Mr Bungle and the descendants of Devo shouting from the shores of The Lord Of The Flies, you might begin to imagine how unpredictable their sound can be. Simultaneously whimsical and dire, they flit from surf rock to gothic faster than you can sing space opera and with far more dramatic flair. After displaying a penchant for narrative songwriting on their debut, The Sweat Tapes, they’ve dove directly into the concept for their follow up.

A sci-fi leaning story about a lone space traveller, the underlying problem with The Astronomical Calamities of Comet Jones is that the narrative isn’t overly interesting or conceptually original but the execution is definitely both. Outrageous and eclectic, each track does an excellent job of showcasing their eccentric ideologies.

Like your favourite director’s worst movie, the album loses gravitas even as its narrative seeks to build mass, and yet, it is utterly, indefinably loveable.

Broadcast Park is gritty, raw and thick, full of misleading lulls presented here as potholes on a dirt road. It’s really quite excellent if you’re in the mood for being thrashed about.

A vocalisation of manifest injustice, this is the bang and the whimper, the burning of the straw man in variegated and at times atonal intonations that flux from sombre to manic without diverging from a brand of beat delivery that feels as jarring and unacceptable as its subject matter should. And yet, it’s so authentic, so immediate, grounded and familiar that it’s like listening to your down on his luck mate air his grievances. And good on ’em, good flipping on ’em, because it’s taken years for this LP to arrive and you’d have to wonder if there were no frisson at this point then why make anything at all? Thankfully we have fragments here that are over four years old and are hitting home in ways that are more relevant than ever. Things are not going well and it’s a great time for people to hear why.

Tape/Off have put forward something that says, this is Australia, this is modern life, this is malaise meets rage at its most percussive and poignant. This is the sound of someone who’s finally had enough and is ready to speak up.

Devil Electric are dark in the same way that Venetian blinds block out the sun – it works but there are pitch black solutions out there you may prefer. Positioning themselves as purveyors of a profound doom, the songwriting is more syllogism than soliloquy and sits on a platform that panders to whatever derivation of “Put a bird on it,” plays in the monochrome twilight. They’re much more engaging when they lean into the rougher riffs and grit. Oh sure, they’ve got licks for days, and they’re very happy to show them off, but it’s more slideshow trudge than triumphant spectacle.