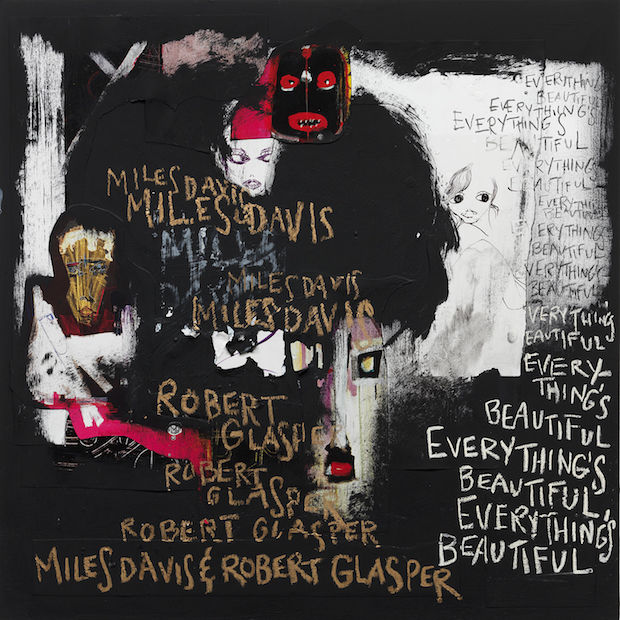 Everything’s Beautiful is reminiscent of the first time listening to Dilla’s Donuts, feeling like it was some inevitable thing, an immutable part of musical reality that always existed but didn’t yet have form, rock dogma copping a seminal load right in the face. Yes, Everything’s Beautiful feels that way in the beginning, but over the course of the album it gradually blossoms into something more akin to sitting in the lobby of a sex resort, and is, of course, exactly as awesome as that does or doesn’t sound to you.

The opener, Miles Davis Talking Shit, has a real Burroughs/Scott-Heron vibe to it, and while it’s interesting it’s also vaguely parodical and mildly misleading. It’s actually the first instance of a non-problem presented by the front of the album, the first three tracks aren’t really facing the same direction as everybody else. It’s not that they’re bad, actually they’re pretty dang good, it’s just when held up as a whole it feels as though a few of the feature artists are having different conversations than the rest of the crew.

These early tracks, Illa J’s They Can’t Hold Me Down and Bilal’s Ghetto Walkin (which are effectively different strains of the same refrain), and Phonte’s Violets, are more traditional hip hop affairs that don’t fare so well when held next to the more ambient, experimental and vaguely trap, chill-wave vibes on the other cuts. They work early on in context with the vocal open but get in the way a little as the album unfolds, setting up expectations for something that doesn’t exactly exist.

What does exist at the back side is a somewhat erotic set of surreptitiously sleazy soundscapes, and oh man, are they ever built to make you feel ways, especially when your guest list includes ladies like Georgia Ann Muldrow and the built-to-sound-sexy Erykah Badu, who can’t turn it off even when she delivers her track with a sort of cutesy, j-pop curl in the chorus and a lethargic reggaeton bent brought out by the (presumable) backing of a department store organ. Then there’s a second swing in the one-two soul punch, the John Scofield and Ledisi feature, I’m Leaving You, and boy, the bass on that thing is so thick and heady it feels like pushing through puberty all over again, the sexy-time feels are simply overwhelming even if the context is inappropriate.

While you could point to comparable genre trends, held against their inspiration everything on Everything’s Beautiful sounds wholly original The cuts manage to highlight not just each artist’s take on Miles’ work, but their respective approaches to creating work of their own. This diversity of songcraft and the incorporation of, “Original recordings into new collaborative soundscapes,” means that for some (mostly Miles purists) the beauty of the originals will be lost. That’s not really the point though, if you wanted to listen to Miles blowing his own trumpet then you have endless avenues to do so, but this is about modern artists reflecting Miles in their own light. It just so happens that most of those lights are shaded a sensual red and put out in a way that would make Roxanne blush.